Why Does My Toilet Gurgle When I Shower? A Florida Plumber Answers

If your toilet is gurgling when you shower, you have a blockage.

Here’s the longer answer: Your shower and toilet most likely share a drain line and a vent stack (this setup is called wet venting, more on that later).

If either the line or the stack has a clog or blockage, air is forced either up or down your toilet, making the gurgling noise you’re hearing.

In this article, we’ll explain how to solve the following problems:

First, let’s go into wet venting to give you more context on why your toilet is gurgling while you shower.

Rather have a plumber come solve your issue now? You’re not alone! We’re available for drain clearing 24/7.

Drains are usually vented separately, but if they are close enough (like the drains in your bathroom), they are commonly vented through a pipe that serves as the drain for another fixture. In this image, the toilet, sink and bathtub all drain to 1 mainline and vent through 1 main vent.

If there is a clog somewhere along this line (either in the drain pipe or the vent pipe), air is either pushed out or sucked into one fixture (like the toilet), when another is used (like the shower).

We’ll explain both in more detail below, starting with the clogged drain. 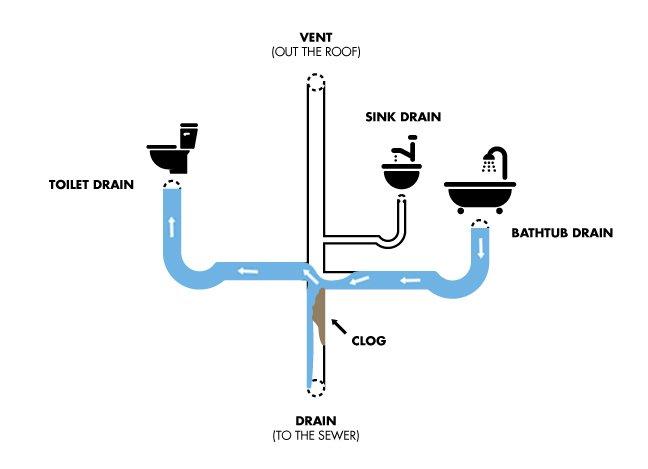 If the blockage is in the drain, the gurgling noise could be a result of:

1. Forcing air out: When you turn your shower on, the water drains down the pipe, pushing the air that was in the pipe out with it. If there is a clog in your pipes, that air can get trapped. With nowhere else to go, this air may be forced up through another drain, like the toilet.

2.  Sucking air in: If there is a clog, the flow of the water from the shower to the sewer drain can create a vacuum. This vacuum effect can be strong enough to actually suck air down through the toilet p-trap, causing a gurgling noise.

While a gurgling toilet may merely seem like a nuisance, it can lead to larger issues, like damaged pipes. It should be fixed as soon as possible.

How to unclog your sewer drain

Unclogging your sewer drain or pipes can be fairly complicated and result in worse clogs or damage to your pipes if done incorrectly. We recommend contacting a plumber to unclog sewer pipes.

As we mentioned above, your bathroom fixtures are likely connected to one vent stack. A vent stack is put in place to:

Even though vent stacks don’t carry any water, they are an extremely important part of your plumbing system. If your vent stack is blocked, negative pressure can build in the pipes, interrupting the water flow.

A blocked vent stack can also trap air in your pipes. Instead of leaving via the vent, air is forced out through other pathways (like your toilet), causing the gurgling noise you’re hearing.

How to unblock your vent stack

To remove a blockage in your vent stack, you will need to safely get on the roof. If this is something you are unable or unsure of doing, you should contact a plumber instead.

Note: You can cover the vent stack with a protective screen to prevent future blockages.

Ready to shower in peace? Hire a Florida plumber!

Our Red Cap plumbers can be available 24/7 for emergency service if needed and will take their time assessing and repairing the issue correctly — and on time.