Dunedin Plumbing Pros Who Work For You

At Red Cap, we believe in treating customers like family. From the first phone call to the job completion, we work hard to respect your time, your home and your budget. When you hire us, you're part of our family, and our service will prove it.

When you hire us, you'll also get:

Services We Offer in Dunedin

Need a drain cleared or a line repaired? No problem. Our team of plumbers is trained to expertly handle any drain and sewer service so that you don't have to.

The drain and sewer services we offer include:

If you need a water heater repair or installation, you want the job done right. With Red Cap, that's exactly what you'll get. We know our way around water heaters, and will ensure the job is done correctly (and redone for free if you're not happy with it).

The water heater services we offer include:

From a toilet repair to a garbage disposal install, our team of experienced pros is trained to handle it all. If you need a bath or kitchen service done right, we're your go-to team.

The bath and kitchen services we offer include:

If you want to prevent costly repairs down the road, you should invest in a maintenance plan.

Ariana noticed a leak at the base of her toilet, so she decided to call an expert plumber.

We sent our pro, Keith, to check it out. After an initial observation, Keith fixed the toilet. After talking with Ariana about other plumbing issues she was having, he decided to do a camera inspection of the home's piping and found a leak. He explained the situation to Ariana and suggested replacing the Orangeburg piping that she had. Once this was approved, we sent a crew over the next day and worked to replace all of the outdated sewer piping.

“...Ever since then I’ve used their service multiple times and have been satisfied every time. This sewer job is no exception. It was smooth from start to finish and I couldn’t have asked for a better experience. Kudos to you, John for turning things around. I will now continue to not only use Red Cap for my plumbing needs, but I will also recommend Red Cap to my local friends.”

We guarantee that you will get no games with the prices we offer, no surprises on the service we deliver and no tricks when it comes to your bill. We charge a flat rate for all of our services, which means we do not bill by the hour. So whether a job takes 1 hour or 24 hours, we will charge the same upfront price we promised before we started service. 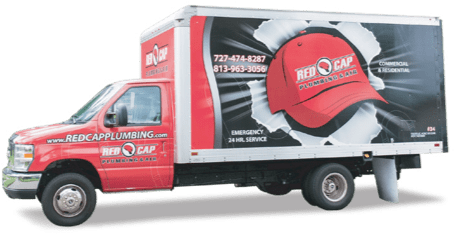